We love this, well done Victor from our Year 3! You're keeping our spirits up! https://t.co/PIX8wl2Vuz

"I really enjoyed the fitness workouts. And my 60 minute bike ride, three times a week with my mum." Victor, Year 3 Congrats to Victor and Jashanpreet, winners of our Fitness Diary competition! https://t.co/SshfEmqxFS https://t.co/2IPvfSHDwS

A happy Eid Mubarak from our families to yours!

Ms Poolman and Ms Gringeri are filming a school tour for our new year 7s today, so you can have a look around. It will be on our website soon! https://t.co/Hwf0hUMwUZ

School nurse, Ms Ward, has put together some helpful information sheets for students on topics such as mental wellbeing, emotional and sexual health, and sleep. Read and download them at https://t.co/iFUTdvI7mZ

Tune in to another wonderful story time. This week join Mrs Lee for one of her favourite picture books and help us celebrate reading! https://t.co/niXG5b80rj #hga #storytime https://t.co/kE5LCj9hMQ

Need mental health and wellbeing support? https://t.co/98ZZ3YlIpe is a safe, confidential support service for all young people in #Bexley. Counsellors available 12noon to 10pm on weekdays and 6pm to 10 pm at weekends, every day of the year #MentalHealthAwarenessWeek https://t.co/etnpGXhAjY

Harris Garrard continues its evolution into a secret garden in the heart of London. We are so lucky to have such wonderful spaces for learning. #HGA #forestschool #secretgarden https://t.co/UKjtnOEKP3

This week join Mr Sheppard for story time as he shares one of his favourite stories! #storytime #HGA https://t.co/Z3yxKxYSes https://t.co/cK2VSoNzFD

Give a big hand to the winners of our 'Write a Biography' challenge. We asked students to interview a relative or neighbour on the phone, and then write a short biography. Read the fantastic winning entries at https://t.co/VzPkeGZ6yg #LearningChangesLives https://t.co/bJFoaRDFxQ

#forestschool today making some beautiful log badges and insect houses. That way they can also #StayAtHome during isolation. #HGA https://t.co/qtOGvxTRLX

Join Mr Butcher for our first Storytime! Nothing beats hearing a story being read aloud and this is one of our favourites! Follow the link to watch now - https://t.co/oMww7HfRYw #HGA #readalong #storytime https://t.co/FH2Tf2M1YV

Mr Smith has a new independent learning challenge for all our students... Keep a fitness diary! Find out more at https://t.co/5NiTEFYBXC https://t.co/EtGPb7vjXC

Our #Pastoral and #Safeguarding Team, including Kim and Lisa (pictured last year), is working hard to improve and refresh their skills while school is closed, so they can provide even more support to students/families when we reopen. More at https://t.co/pnegaSoTaJ https://t.co/2MDMO9N2Ax

All Harris Garrard Academy students from the primary, secondary and Sixth Form phases had the opportunity to exercise their democratic rights and elect a student leadership team.

Each secondary tutor group and primary class held a mini election to choose their class representative. 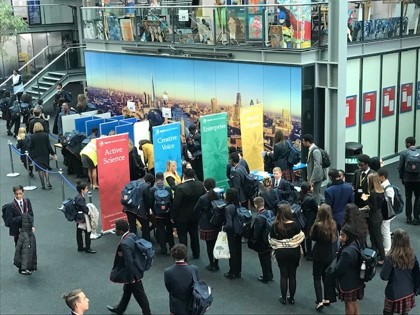 The Sixth Form, who were vying for Head Girl, Head Boy and Hub Captain positions, had a greater task ahead of them. Sixteen sixth formers put themselves forward as potential candidates and the husting process commenced. They had to write a one-minute speech which they delivered in hub assemblies in the secondary phase and phase assemblies in the primary phase.

Some even took their initiative to campaign during break and lunch times hoping to gain more votes.

Thursday 10th October was election day (pictured). Students from reception up to Year 13 were casting their votes throughout the day. The candidates for Head Girl and Head Boy also had to undergo an interview with the Head of Academy. The ballot boxes were closed at 2:10pm and the vote counting begun. Just under half of the students in our school chose to cast a vote in the election process. We can now reveal the results.

The following candidates have now been elected to high office as Hub Captains:

Having also successfully contested a gruelling interview process, the following students have been appointed as Head Boy and Head Girl:

For all who took part, we saw growth, confidence and resilience. It was truly democracy in action!