This week for story time join our very own Miss Buchanan for one of her favourite books! #storytine #hga https://t.co/8KJpobIzEa https://t.co/rioJ9Agu7E

When the Thames Clipper arrived at Canary Wharf yesterday just after 9am, 23 students from Harris Garrard disembarked for one of the highlights of our school year.

The annual Whittington Course is a fascinating insight into working life in the financial heart of London, organised for us by the Worshipful Company of Security Professionals and Barclays. 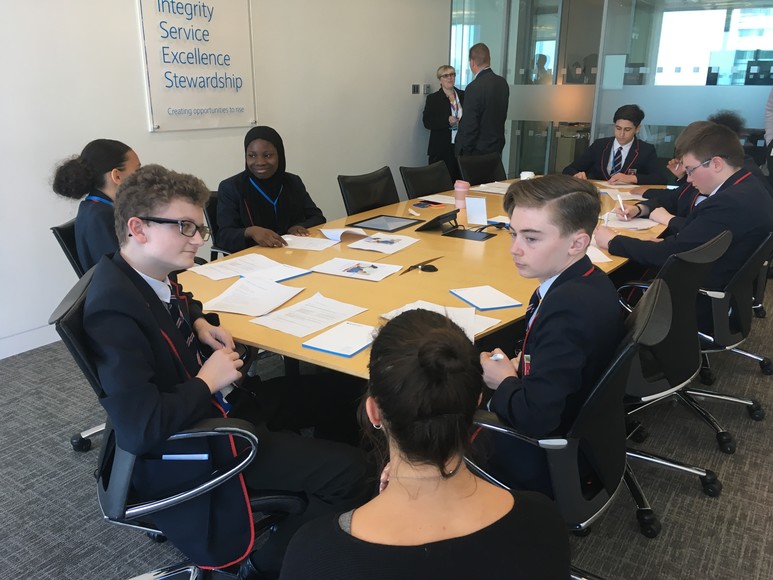 During a packed day, Year 10 Business Studies and IT students: 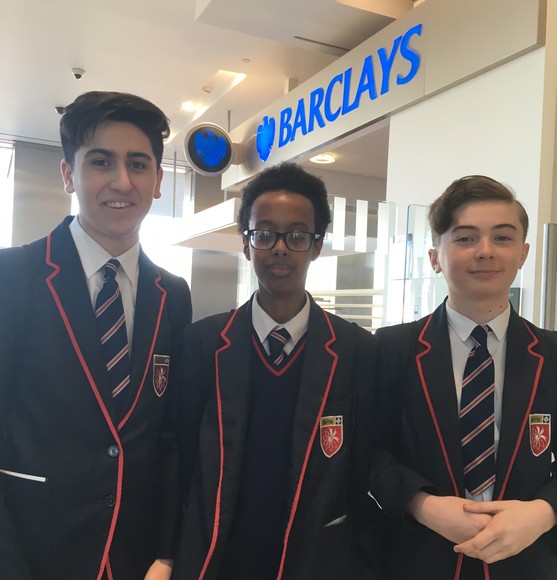 “Today was good because it tells us about the opportunities that are out there and what sort of things we might want to try,” said Peter, Year 10. “I really enjoyed it and it made me think a lot.”

Amber, Year 10, agreed: “It’s been really useful learning about CVs, for example. Before I knew the basics of CVs but I didn’t know how to write one, and now I have a template.” 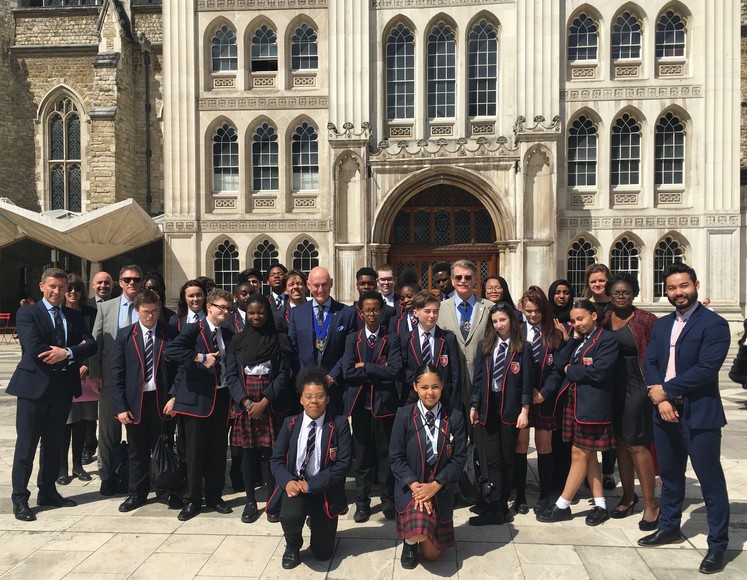 The Worshipful Company of Security Professionals, one of the famous City livery companies, believes that opportunities like this can change students’ lives and horizons.

“What we are seeking to do today is to unlock ambition,” said Phillip Hagon, Master of the Company, who spent 33 years with the Police and ten as Head of Security for Sainsbury’s. “Many young people don’t have the chance to see at first hand the opportunities that are out there, and what hard work will actually achieve. That’s what this is all about today – to make it a little easier for young people in a difficult world and help lift their ambitions.”

To be selected for the day, which has been running every year since 2002, students had to complete a written application and have an interview too. “We asked students about their career aspirations but also about their character,” said David Hem, Director of Learning for Business and IT. “There was a lot of interest and people were really excited when they heard they had got a place.”

Nicole said: "Days like today give us the aspiration to think about different things. I like studying English, Business and Maths and am looking at how they might work together for me later on. This day will really help.”

The day in pictures

Arriving at Canary Wharf on the Thames Clipper from Woolwch. 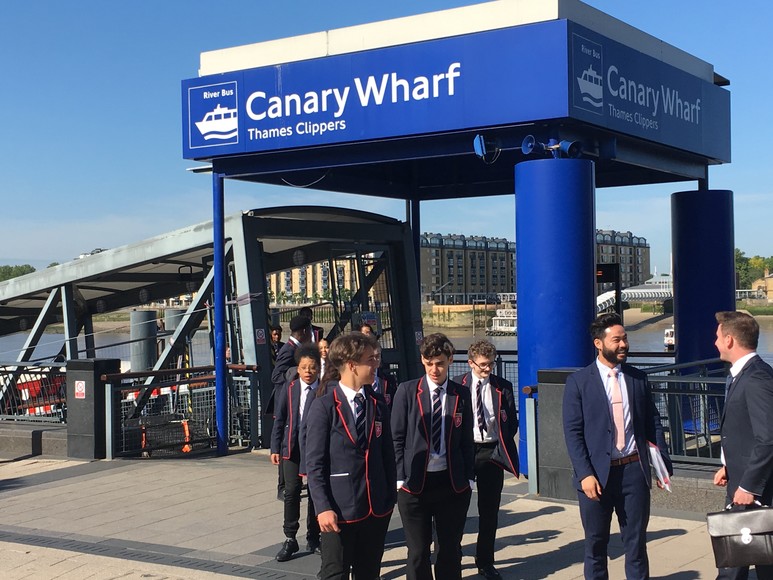 Students learn about CV-writing with Richard, a graduate who joined Barclays just ten months ago so could talk from the perspective of a new arrival. 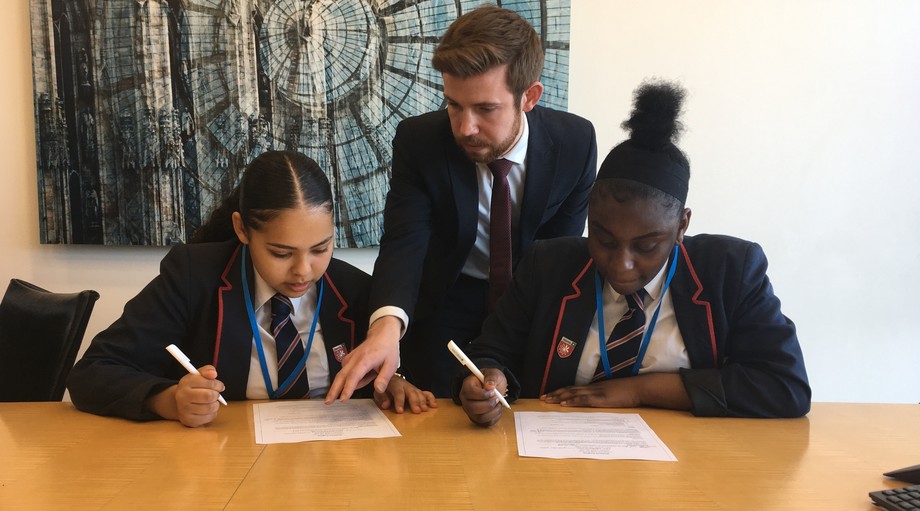 Kinza from Barclays shares some CV-writing tips. "Keep your CV to one page. Use active words such as 'presenting' and 'leading' at the front of the sentence, so people read them first. Don’t lie, but make your achievements sound good, and that you made a difference." 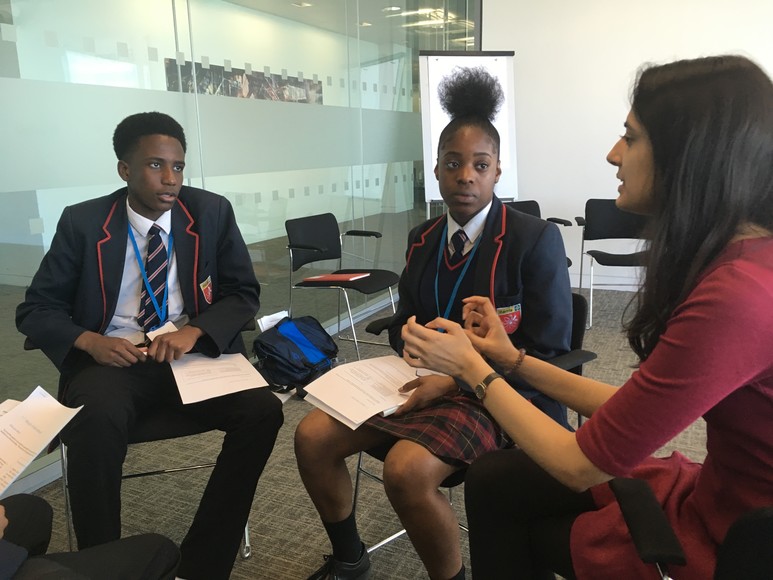 Alan and Elijah practise their interview skills with the help of Tiffanie, who works in operational risk strategy at Barclays. 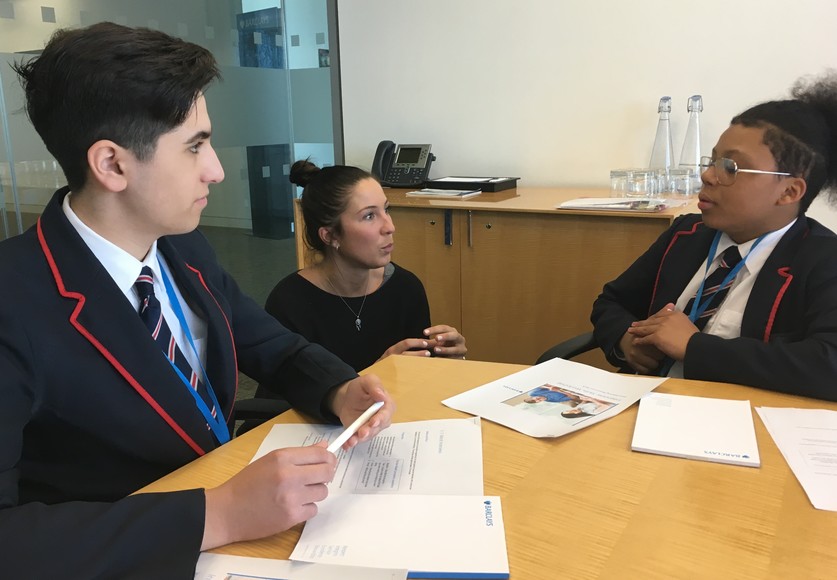 Students take the Docklights Light Railway to Bank and enjoy spectacular views from the Sky Garden in Fenchurch Street. 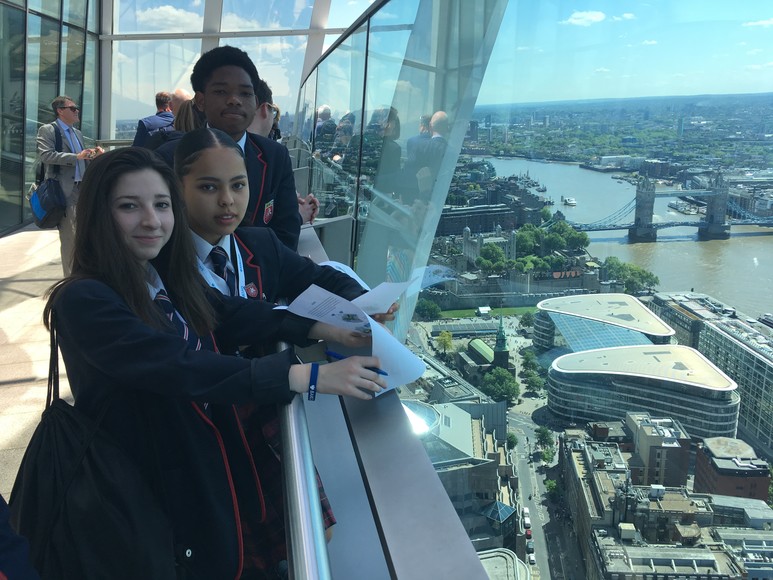 Over lunch at a converted Victorian Bath House, barrister Claire Palmer talks to students about how to network. "Networking need not be scary and it's not magic. It’s really about listening, asking questions and being interested in other people. You can learn a huge amount from being humble and asking questions. And it's not about getting business now. The connections you make might be useful to you five or ten years into the future." 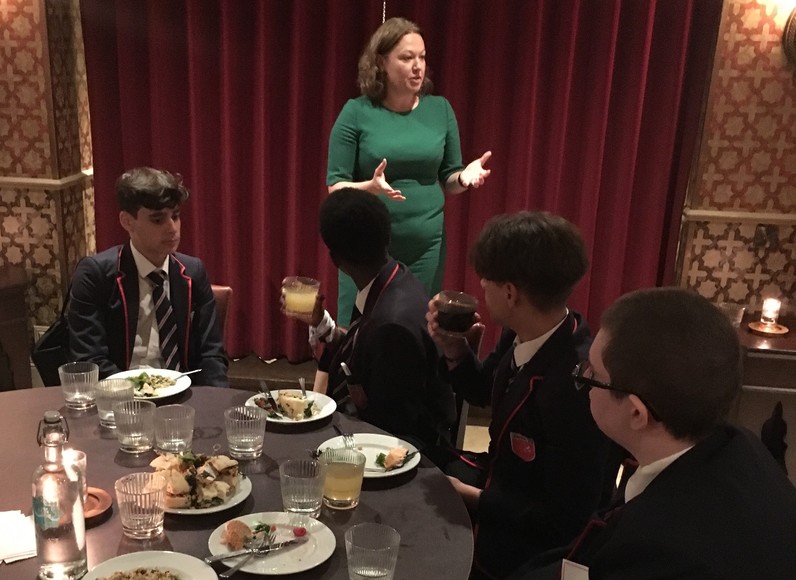 During the lunch, recent graduates spoke to students about their experiences. 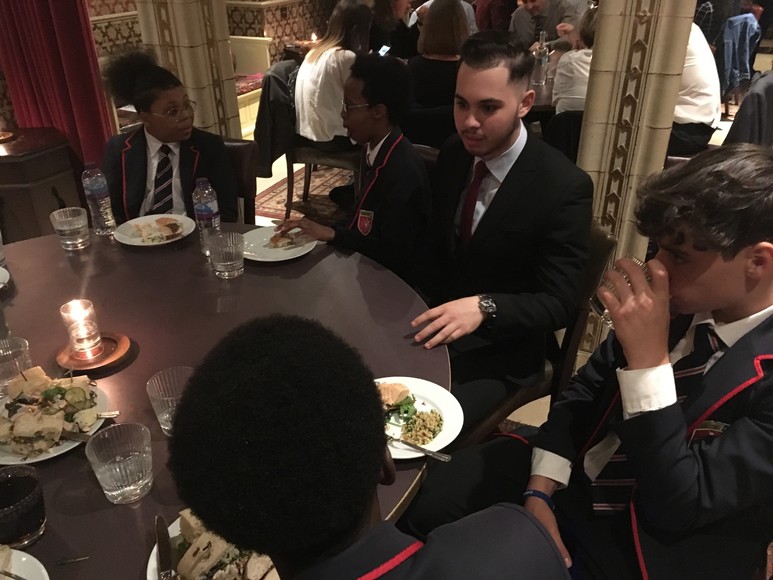 During a visit to Wood Street police station, students got to know Bella, one of the City of London Police's explosive search dogs. They learned about how the dogs are trained and the working lives of their handlers too. 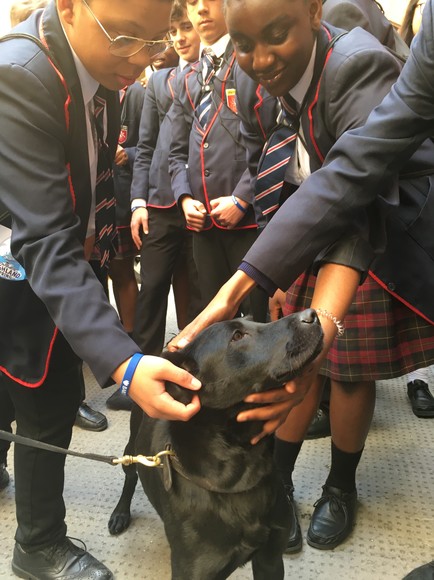 They met the City's mounted police and public order units too, and learned about careers in the police. 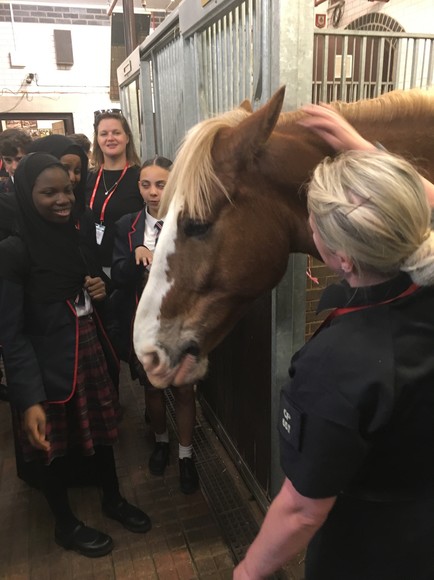 And finally, at the end of a fantastic day, they took black cabs to Canary Wharf to get the ferry back to Woolwich. 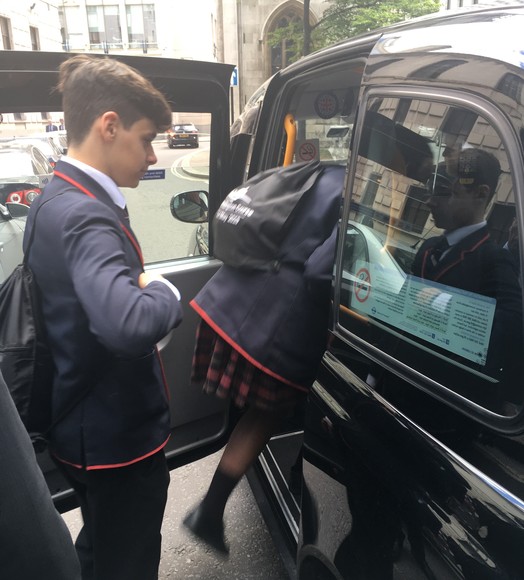 The academy would like to say a huge thank you to the Worshipful Company of Security Professionals, Barclays and all the other people and companies without whose support this really valuable day would not happen. Thank you.

The day is named after the legendary Dick Whittington who travelled to London (allegedly with his cat) to seek his fortune. After initially doubting his ability and quitting the city, only to be urged to return by the sound of London’s bells, he ended up becoming Lord Mayor. The folk tale is inspired by the real-life Richard Whittington (1354-1423), who was four times Lord Mayor of London.