Year 5 are drawing pictures with depth and from various perspectives. These examples show we have been practising the skill of drawing with a vanishing point. Lovely work! https://t.co/HLEuAZb87i

Harris Garrard Academy has come 2nd out of 55 similar secondary schools based on its Attainment 8 outcomes, the Department for Education has announced. We are very proud of this achievement in just our second year as an academy. Find out more https://t.co/lhXVJ6d2au https://t.co/LqHhtlEJrg

Harris Garrard faced a tough opposition in Harris Beckenham. After a tough game ending in 2-2 the game went to penalties and we was able to prevail. Fantastic team. Fantastic spirit. Semi finals here we come! https://t.co/NdA80A7XjH

Basketball update: there has been a slight delay in the team returning however the children will be back by approximately 6:30 pm. Where possible, parents have been informed by phone call. Thank you for your patience and understanding.

One of our Y7 Groups having a fantastic day at Greenwich Maritime Museum for Character Day! #learningchangeslives https://t.co/i22ZJs72Xl

⭐️He has done it!⭐️ Congratulations to Basit who has tonight been presented with an award for his Musicianship by the Mayor of Bexley 🥁 What a proud moment for Basit, his family and his HGA family. Well done! 👍🏽⭐️ @HarrisFed @LBofBexley @MayorOfBexley #learningchangeslives https://t.co/2RNUFQG9Jc

We're very proud of our six new #Wellbeing Ambassadors, who will be work with staff on an action plan to raise #MentalHealthAwareness. Big thanks to Pascale Berthellet, Public Health Advisor @LBofBexley for some excellent training! #InYourCorner https://t.co/ymOs4rwqWs

Happy holidays everyone. Thank you to all our amazing students, teachers and parents for their hard work this year! Don't forget school finishes at 12.30pm today and we look forward to seeing you next term on Monday 6th Jan.

Reception have been reading #Supertato and practising their writing too. They even made their own spud superheroes! https://t.co/uCHjqpEIGK

A massive congratulations to our KS2 Netball steam who convincingly won their game 25-0 today! We’re all so proud of you! @HarrisFed https://t.co/lpP3MIDTQl

Thank you for coming! The little ones loved your book and some years 6s have been inspired to become sports journalists! @HarrisFed https://t.co/Yo0Cf0ldtq

Our Big Write has started! With Mozart in the background and a candle to help us focus, we know our writing will be super! @rosBIGWRITING @TheYankeeCandle @HarrisFed @HFEDEnglish #everychildeverydaynoexcuses https://t.co/qdCIoXaCg6

Congratulations to our boys' Year 8 football team for an amazing result and performance. Their most recent game ended 10-0. The boys played with passion, focus and determination on the back of a previous 10-1 win. That's 20 goals in two games. Well done team! https://t.co/llYaHXUqAV

HGA in 2nd Place out of 55 Similar Secondary Schools 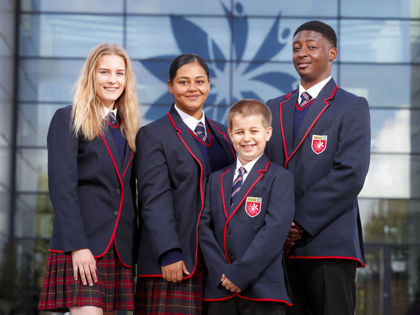 Harris Garrard Academy has come 2nd out of 55 similar secondary schools based on its Attainment 8 outcomes, the Department for Education (DfE) announced recently. This is a remarkable achievement in just our second year as an academy. Last year we came 5th in our group.

The DfE puts secondary schools across England and Wales into groups of 55 whose students have a similar attainment at the end of primary education. They then compare how students in those schools perform at the end of Key Stage 4. This enables schools to get a really good idea of how they are performing against schools with a similar intake.

"Before joining the Harris Federation this school was significantly under-performing, so we are very proud of our students and teachers for having been able to turn things around so quickly,"  said Chris Everitt, Assistant Director, Harris Federation Secondary Education. "At the heart of this success is an absolute belief in the ability of every student to shine – no matter what their background, ability or character."