THANK YOU to all our parents, students and teachers who have been so amazing in the past couple of weeks, as we've transformed ourselves into a virtual school. Our building may be closed to most students, but our school community continues to make sure that #LearningChangesLives

Evening all, Ms Day (Head of PE) will be taking part in @thebodycoach daily workout tomorrow at 9am. Please feel free to join ... https://t.co/RSodAxNLdW

Remember to collect your learning packs from the primary office! Also have a look at this free resource now available to you all... https://t.co/6g6IcsdS1g

A busy library today as our students ensure they have plenty of reading material to keep them busy over the closure period! #LearningChangesLives https://t.co/ybS5nP4knB

@RyanSManning So proud of you...

Dear Parents/Carers, In the light of the dynamic and changing nature of the situation regarding coronavirus Covid-19, we have created a remote working support area on our website for secondary pupils. Find out more https://t.co/vYUIb7zS9Y

Parents/Carers - Please note that any new information from the school about coronavirus, including details of possible school closures, can be found at https://t.co/r91RP67GNr. This will always have the very latest information. Thank you.

Students raised £182 for @ReadforGoodUK through a Readathon earlier this term, to help buy new books for every major children’s hospital in the UK. “There are people out there who don't have books,” said Leila, Year 4. "I love reading so it was a fun way to raise money.”

Our third Character Day took place on Wednesday 22 January. We hold six Character Days during the academic year. Instead of the usual timetable students experience a wide range of different activities to help develop their confidence, resilience and independence.

Year 10 had sessions on the science of stress and healthy eating as well as learning about topics such as forced marriage and sexual harassment. Year 11 enjoyed a series of careers trips to employers such as Amazon.

Aleyna, Year 10, shows off a dish of couscous she made during a healthy eating lesson. “We looked at healthy eating for teenagers and made some tasty, nutritious dishes they can cook at home, such as couscous, omelette and flapjack,” said Ms Miller-Peart. “Healthy eating is an important life skill and there’s not always time in the curriculum to teach it, but Character Day gives us a chance to cover important topics like this.” 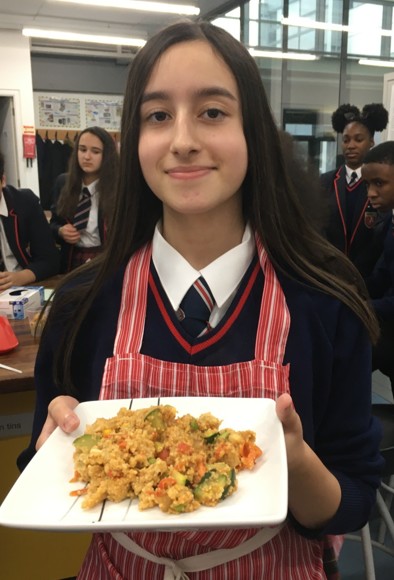 Year 8 learned about teamwork by working in groups to make a tower from paper and one metre of sticky tape. “It was all about building our confidence,” says Harvey. “The teacher separated us into groups we don’t normally talk to and we worked as a team to make a tower. When you grow up you meet new people all the time so we need to know how to do that. I worked with people I’ve never really interacted with before, so it was good because we got to know each other.”

Year 9 take part in a Question of Sport

All of Year 9 took part in ‘Question of Sport’ themed day. The day started with all pupils taking part in workshops on nutrition, the 2012 Olympic legacy, health and wellbeing, and alternative sports. All information delivered was vital for the final part of the day when the hubs went head-to-head in a game show themed competition.

Four pupils were selected due to their efforts and interaction throughout the day to represent their hub. The competition consisted of five rounds. The first four were based on information attained during the workshops that morning (nutrition, the 2012 Olympic legacy, health and wellbeing, and alternative sports) with the last being charades.

The competition started off very close with Active Science taking an early lead, until the final round came, and Enterprise took on charades and stormed into the lead. They managed to hold on to this lead and were crowned the winners of ‘Question of Sport’ (pictured). 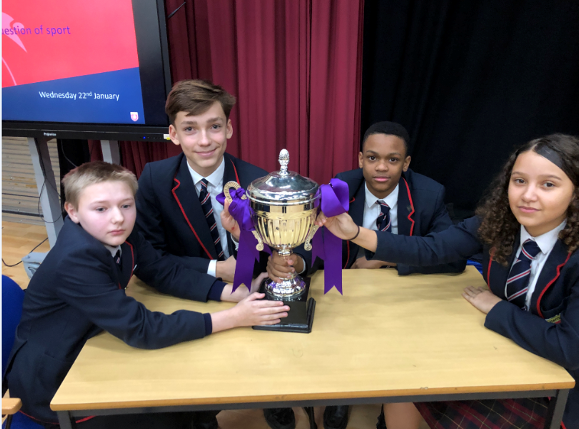 Learning how to revise

Basma, Year 8, pictured below at a session on revision skills. “We talked about revision and discussed different ways to revise and what is effective,” she said. “This is important because we’re going to have exams while we’re at school and we need to know how to prepare for them.” Students learned why cramming doesn’t work and that for information to really stick you need to absorb it and then do something with it. 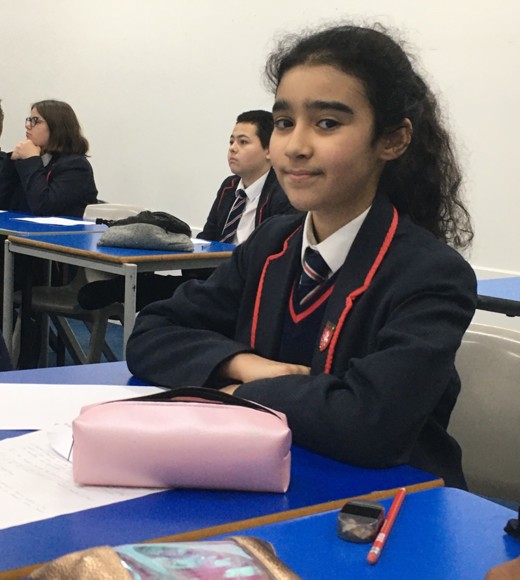 Year 9 had sessions on mental health and wellbeing. “We learned how to stay healthy and how exercise can help with mental health,” says Bobby-Lou, Year 9. “You can run for 30 mins a day or walk to school instead of getting the bus, for example. So you know in the future how to handle things like depression, which when you’re older will help you."

Eylul and Jacob, Year 7, pictured with Mr Smith in front of one of our Character Traits boards. Year 7 looked at the skills and qualities they might need in their future jobs. 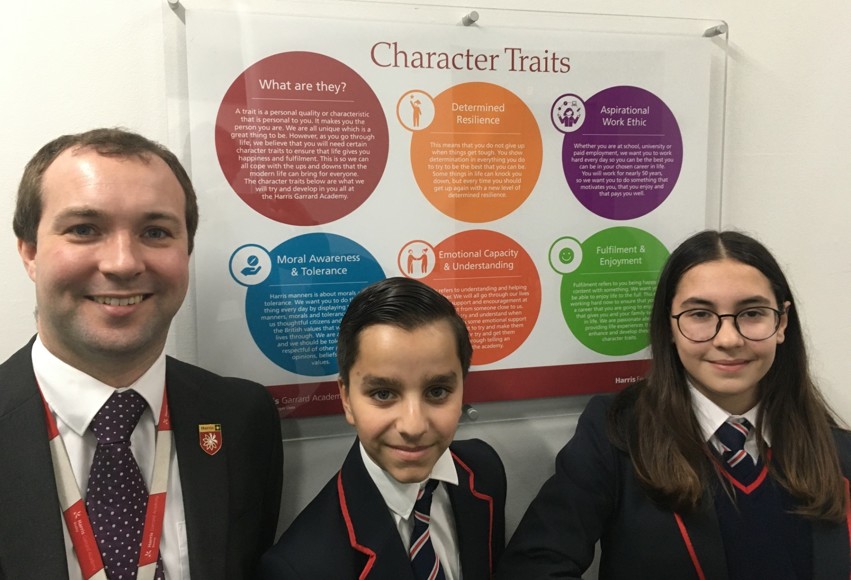 “We learned about the skills and qualities we need when applying for a job – such as patience, brilliance and standing out when other people around you are good too," said Jacob. "I like Character Day because it’s a change from usual lessons. You get to learn about different things. We learn about character traits such as to never to give up and keep trying and you'll get there in the end.”

Reflecting on Character Days so far...

We asked Year 8 to reflect on the three Character Days they have experienced so far.

“I like Character Day as you can learn about what will happen in life when we get older.” Demi, Year 8

“The Character Days were really helpful as they taught me many important things that will help us develop a better character in young teenagers.” Filip, Year 8. Read Filip’s Character Day diary.

“Personally, I think Character Day is the best because it taught us how to create a company and the main steps for accomplishing one. You need to be smart with what you are doing and focus on getting profit to raise your company.” Gloria, Year 8.

“I benefitted most from [the sessions on] social media and mental health as they could teach me how to be aware of how long I’m on social media and of the consequences of having an addiction to your phone.” Gloria, Year 8. Read Gloria’s Character Day diary.

“Today I learnt how to revise in many ways such as making revision flash cards, using initials to remember something and watching tutorials on it.” Rio, Year 8. Read Rio’s Character Day diary.

Find out more about Character Education at Harris Garrard Academy. Our Character Days are mapped out to include PSHE, RSE, SMSC, and careers education/guidance, with a particular focus on character.